With a population of 7.69 million people, Khartoum, the capital of Sudan has had a population surge over the last decade.

Since the secession of South Sudan, the Northern region, a much securer and economically active region has attracted people from around the region. Khartoum, traditionally known as Africas trade hub for trade in cotton, livestock, leathers and slaves it was the linking point between Africa and the rest of the Middle-East.

A mixing pot of African, Arab, Ethiopian and Nomadic heritages, today the city has a diverse economy that has been growing at a faster rate than ever before.

However the developments in the agriculture, manufacturing and services industry have not been reflected in the development of economic infrastructure.

Gradual improvements are taking place in the telecommunications and electrification in which internet connectivity is similar to European standards but transportation, clean water accessibility and energy security are still posing challenges for city dwellers.

It is not uncommon to have an electricity blackout once a day for a few hours. Nor is it uncommon to be stuck in traffic for a an hour on journeys that should take 10-15 minutes. As the frequency and duration of such instances occur, city authorities are looking at ways to integrate new solutions and relieve some of the stresses of the city without causing too much disturbance.

A traditional city with grid land formation, some roads and buildings date back to the early 18th Century such as neighboring Omdurman which has slowly morphed into Khartoum metropolis to create the greater City which we call Khartoum.

Geographically the White Nile river is the only separation between the two regions which are interconnected with 3 road bridges and a rail bridge that was built in 1950.

As land usage becomes sought after for residential and social services, the competition for land has left little room for traditional solutions such as widening of roads and increased city electrification.

A comprehensive look at the cities sanitation, water and transportation network is required to be able to fully understand what is present/functioning correctly and what areas are lacking. If there is a block district in Khartoum that has had insufficient sanitation investment for example, then this likely to affect neighboring districts, as power and other services attempt to compensate for the inefficiency.

Entire regeneration plans that create cities from scratch as we have seen in Gulf countries are not economically feasible in a region that has some of the highest population densities.

However with the fight between cars, buses, tuc tucs and horse coach still existing on Khartoum’s busiest roads then the need to create a solution that can cater for all factions of society and road users is paramount for sustainable growth and a progressive future.

There are signs of gradual improvements that have been undertaken over the past 8 years, such as the building of new road bridges between Bahri, Khartoum and Umdorman which has 7 bridges in total crossing the channel at the busiest locations, allowing city dwellers to reach destinations previously unattainable.

Other enhancement such as the upgrade and widening of the Nile Street along the Blue Nile river bank, a popular tourist destination and main access to the Parliament and Presidential Palaces.  This upgrade created a double carriageway to relieve more traffic and created a buffer zone that extends into the river bank, allowing for civilians to enjoy walks along the river bank and enjoy the city views.

Improvements have also been made around the road access on the South side of Khartoum City Airport, currently the only airport in operation whilst the new one is under construction. A smaller scale upgrade that helped improved access and waiting times to and from the city considerably.

Having sewerage vehicles pumping wastewater from the hospital twice a day due to the lack of underground sanitation network puts a strain on congestion near the hospital as the large vehicle waits for its orders to pump, and then again on the near by roads, as the slow moving vehicle makes it way to the water treatment plant.

Similarly, building a supermarket without parking facilities or adjusting the forecourts puts a strain on the local roads as shoppers swallow up pedestrian walkways and any surrounding space, narrowing the road widths causing traffic  congestion.

Without adequate planning to ensure the flow of traffic remains somewhat constant and the parking facilities keeps the cars of the main road, the intentions to improve the living conditions for the locals from the development will remain in vain. 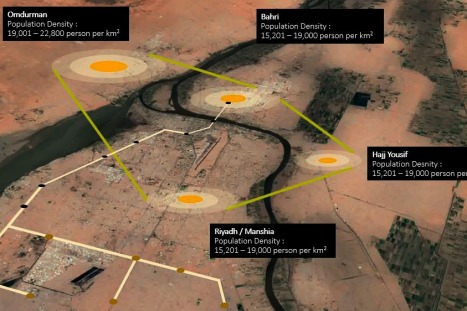 Light Rail Transit systems in hand with correct urban planning have the potential to alleviate Khartoum of some it crippling congestion. With traffic speeds averaging 15 – 20 miles per hour throughout the city simple LRT or BRT system linking the cities metropolis to frequently visited sites has been under planning and procurement by Keep it Straight consultants over the course of the last 3 years. The various factors influencing the LRT route, designs and demand zones are crucial in pin-pointing the best locations for embarking and disembarking.

The duty of planning authorities to correctly anticipate and evaluate development applications and to ensure full cohesion with the built environment is important to ensure a catch up game is not played at a later date when issues of electrification shortages and congestion start to rise.

Khartoum City Metropolis has vast amount of potential for modernisation, and the successive developments gradually undertaken are witness to such potential. Through correct land use mapping and incremental regeneration development on a micro-level, valuable steps can be gained to transition Khartoum as the beacon for trade and culture it once was.

Urbanisation and congestion in Khartoum