The term blood diamonds sends a sense of horror. It actually denotes a diamond that has been illegally mined in order to finance an uprising or a guerilla type of war fare mainly in Africa and other Third World Countries. It all started with the civil war in Angola and much have been heard about the trail of blood diamonds also known as conflict diamonds that went on to fund illegal regimes resulting in wide spread devastation and ill treatment of people particularly women and children who were forced to work in the diamond mines without the necessary precautionary measures. The conflict sustained by the sale of these diamonds has resulted in the deaths of millions so far. Many NGOs along with the United Nations worked tirelessly to bring the news about genocide, mass murders, and ill treatment of common people into the open. It resulted in the passing of the ‘United Nations Security Council Resolution 1295’ in 2000. All diamond producing nations of the world then met at Kimberly to find a solution to the illegal trade in blood diamonds. The Kimberley Process Certification Scheme (KCPS) was created shortly afterwards in 2002 with the diamond industry and the UN promising to stop the legitimate entry of blood diamonds into the industry. More than 70 countries have participated in the KCPS scheme so far and the developed nations that lead in diamond trading have also vowed to stabilize the weak countries that have suffered on account of blood diamonds by helping them in developmental activities.

The participating countries vouch for conflict free diamonds in their shipments and must also refuse to accept any kind of diamond cargo without a KPC certificate. The diamond traders as well as the reputed diamond merchants claim to have made a breakthrough by ensuring that 99.8 % of the diamonds produced worldwide at present are legitimate and free of blood. The critics have expressed their doubts, however. In fact, the 2006 reports published by UN and Government of USA reveal how 23 million dollars worth of diamonds had been smuggled from Ivory Coast, the Capital of Ghana into various Kimberly Process Certified countries and thence distributed as taint free diamonds. The blood diamonds thus end up in the legitimate diamond trade without too much trouble. Non compliance by countries like Venezuela add to the problem too and the conflict diamonds still remain in circulation, unfortunately.

Thankfully, not all African countries thrive on blood diamonds. Botswana is one such country that has a rising economy graph thanks to the legitimate diamond mining in the country. Strangely, Botswana had been included among the poorest countries of the world in 1966. It has decided to turn its fate by shunning blood diamonds and settling for legal mining and trade purchasing. Be sure to ask for the company policy vis-à-vis blood diamonds and request a list of the countries the diamonds are sourced from. Be firm in insisting for a certificate guaranteeing that the diamond sold to you is not a blood diamond. 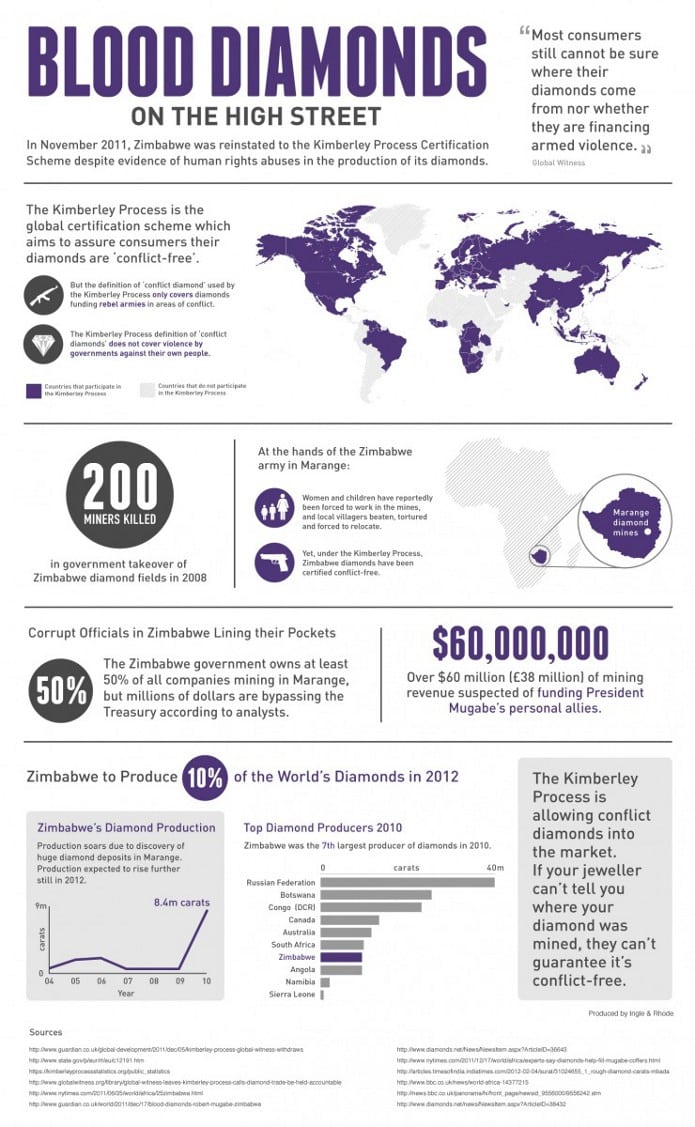 What are Blood Diamonds?